For the last few years, the spring months are a mix of worry and excitement as we focus our attention on maternity season for the rare Northern Long-eared Bat (Northerns) we study and their cousins, the Little Brown Bat.  These tiny bats only have one pup a year, which means every pup counts for their populations to recover from the devastating impacts of White-nose Syndrome that kills bats during winter hibernation. While we can monitor one site where where a small group of Northerns hibernate on Martha’s Vineyard, we know other small groups are hibernating in crawl spaces or damp cinderblock basements elsewhere on the island at unknown locations. Each spring, we hope females will return to the maternity colonies we monitor in Oak Bluffs, Vineyard Haven, Edgartown, and West Tisbury. 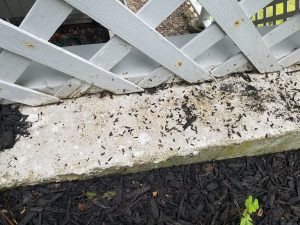 Bat scat below the Nussbaum Roost

The sight of bat poop under a maternity roost in April brings a smile to our faces as we know our little furry friends have survived another winter. Sam and Rhoda Nussbaum have graciously allowed us to study the Northerns roosting on the exterior of their house on Major’s Cove of Sengekontacket, so we were happy to report that their bats were back this spring.  We were even happier to recapture a female we had not seen since we banded, nanotagged, and tracked her to the Nussbaum roost in 2016. We know she is at least 4 years old because she was an adult when we captured her in 2016, but she may be older. Northerns can live 18 – 20 years.  We also captured and banded a new female at this roost in mid-May that could be the daughter of this female.

The other maternity colonies are not as easy for us to monitor as we don’t know the current roost locations. The Vineyard Haven maternity colony had several roosts in the Lambert’s Cove/Pilot Hill Farm area, but the two we have monitored in the past were not being used this year. However, we captured a female at Cranberry Acres on 25 April and acoustic detections indicate that the colony is active again this season but are eluding us for capture. In June, we netted a site near Job’s Neck Cove of Edgartown Great Pond and were rewarded with the capture of a lactating female Northern (see video above). With hopes of locating her maternity colony, we attached a radio transmitter to her back using eyelash adhesive. However, she promptly chewed off the antenna and rendered it untrackable within a few minutes. Tiny bat research requires a lot of patience.

In July, Todd Mayhew and Audrey van der Krogt contacted us when they found a dead bat pup in their yard off of Waldron’s Bottom road.  While we were sad that the pup had died, it was exciting to see that it was a Northern!  We have captured Northerns in the vicinity over the past few years, but never a lactating female to confirm a summer colony.  This pup in early July was confirmation that a colony is active in the area.

Little Brown Bats were also common around Martha’s Vineyard before white-nose syndrome decimated their populations in New England.  For the past three summers, we have monitored a small colony roosting under loose shingles and trim boards on the Schmidt family barn in West Tisbury. In 2016, we attached nanotags to a couple of females, and one was picked up by a monitoring tower in September on Cape Cod, telling us that at least some of the females migrate to the mainland for winter hibernation.  This summer, we set mist nets along the barn exterior to catch bats as they came off the roost on July 10th. Interns Makenzie Luce and Ingrid Moore were tasked with counting bats as they emerged at dusk while the rest of us focused on captures in the mist net. At least 51 Little Brown bats emerged from the barn, and we captured 10 of them.  We captured adult females, a single adult male, two volant young of the year, and one female carrying a large pup!  It was an exciting night for all of us to see these beautiful little bats in a healthy colony. 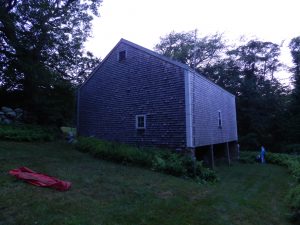 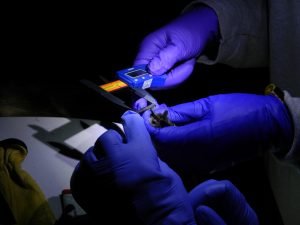 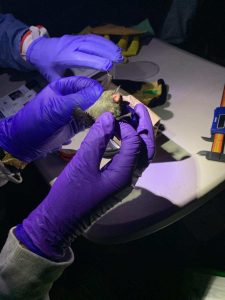 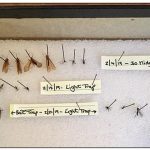 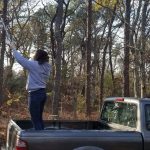