With 4 million contributors, more than 67 million records, and a third of a million species documented, iNaturalist might seem like a complete archive of biodiversity. But with an estimated 1.3 million species described in the world, and far more than that thought to be still awaiting human discovery, this powerful “citizen science” website has a long way to go before it fully documents everything that’s out there. 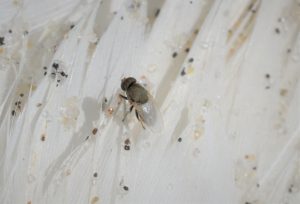 A tiny fly recently found by BiodiversityWorks staff on the south shore of the Vineyard may make one very small contribution to iNat’s coverage. The fly, tentatively identified as Hecamede albicans but awaiting confirmation, represents the only North American report for this species that iNat has received so far, and one of just three North American reports for the genus. (iNat contains only about 20 records worldwide for the genus Hecamede, some of which are tentative or “needs ID” reports of H. albicans from Europe.) Only about a millimeter long, the fly was found on May 21 associating with carrion on the beach — a dead horseshoe crab and a decaying great black-backed gull. The record can be viewed here; its location has been obscured because the site was a sensitive one.

Originally misidentified as a member of a different family, Canacidae, the fly was posted on Facebook with a request for ID help. It caught the eye of Jacqui Kluft, an interpreter with the Massachusetts Department of Conservation and Recreation who earned a Ph.D. studying beach invertebrates. Based on her field work experience, Ms. Kluft proposed Hecamede albicans, which is a “shore fly” in the family Ephydridae.

Bugguide, another “citizen science” website, has a handful of Massachusetts and New York records for H. albicans, evidently the only member of the genus known to occur in our region. Photos in Bugguide are a good visual match with the fly photographed on Martha’s Vineyard. Interestingly, all of the Bugguide records come from July or September/October. Adding a May record to the picture might suggest that the species has three “flight periods” or generations in the course of a year.

Little seems to be known about Hecamede albicans. The genus as a whole is said to have habits similar to what we observed on May 21. H. albicans occurs primarily on the shoreline of the Mediterranean Sea, and we assume it is an introduced species on the East Coast of the United States. Hecamede contains between a dozen and 16 species, depending on the source, with the greatest diversity said to occur on tropical Pacific and Old World coasts.

The shortage of records for H. albicans does not mean it is rare. One limitation of iNaturalist is that records submitted there tend to be disproportionately of species that are easy to detect and/or charismatic — and a sand-colored, millimeter-long fly is neither. So the species could be common, just not an insect that many people have previously noticed and bothered to photograph for iNat submissions. We hope that experienced observers will confirm our ID at least to the genus level (the photographs we managed may not support identification to the species level). But in any case, we enjoyed the process of finding, documenting, and trying to learn about this odd little fly. And we love participating in the “citizen science” process, with our contributions combining with those of millions of other observers to create an ever-improving picture of biodiversity. 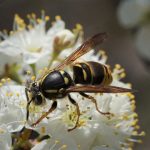 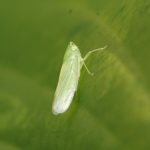