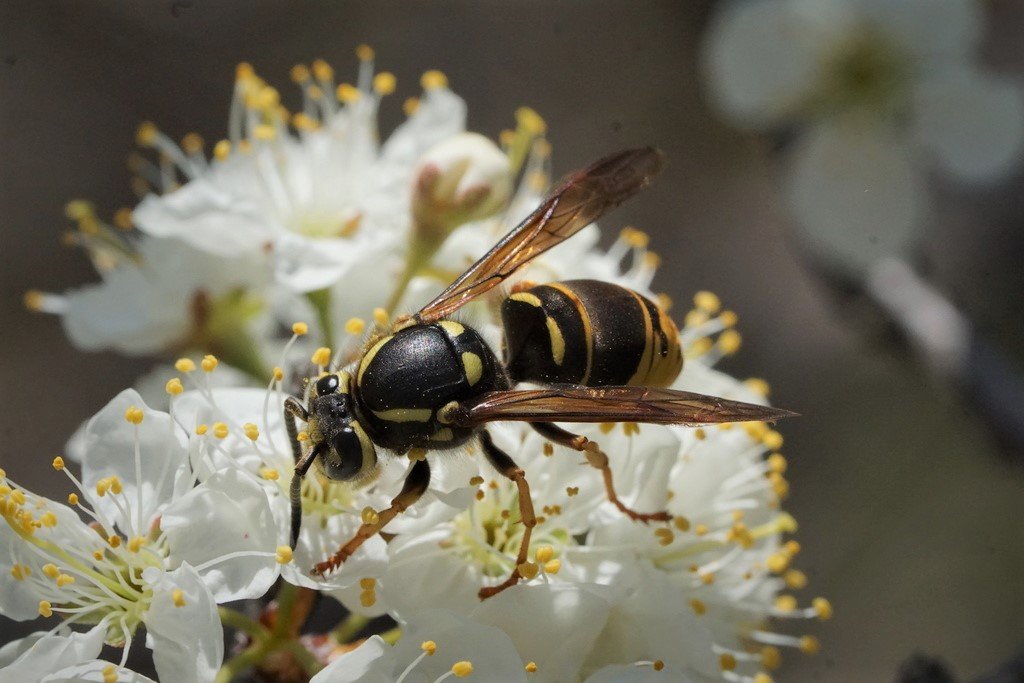 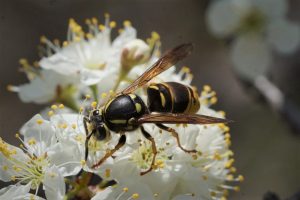 An interesting species was added to the BWorks Martha’s Vineyard Atlas of Life project on iNaturalist last weekend: Vespula vidua, sometimes known as the widow yellowjacket. A queen or “foundress” of this large wasp species was photographed visiting beach plum blossoms along a private road in Edgartown. There are many iNat records for this species from mainland Massachusetts, and a few from Cape Cod, but this sighting furnished a first record for the Islands. The record is viewable here.

Yellowjackets are divided into two groups, or genera: Dolichovespula, or the “aerial yellowjackets,” and Vespula, or the “ground yellowjackets.” The common names describe the usual nest locations for the genera: Dolichovespula typically builds exposed nests on tree limbs, house eaves, or similar objects, while Vespula typically builds concealed nests underground or in voids between walls of houses. Seven species of Vespula occur in Massachusetts, according to iNaturalist.org and BugGuide.net records, and three species of Dolichovespula. Only one Vespula species, V. maculifrons, or the eastern yellowjacket, and one Dolichovespula species, D. maculata (the bald-faced yellowjacket, sometimes erroneously called a hornet) have previously been recorded in iNaturalist for Martha’s Vineyard. It is not yet clear if these results reflect truly low yellowjacket diversity on the Vineyard, or if Vineyard observers have just been disinclined to take photographs of these sometimes daunting insects!

V. vidua, the widow yellowjacket, is an attractive insect, black-and-yellow like most of its relatives but distinguished by extensive, unmarked, glossy black areas on the thorax and abdomen. As is typical for these two genera, only fertile females, or queens, survive the winter. In spring, queens begin constructing nests, stocking them with eggs that will hatch into infertile female “workers” that will help the nest expand. Later in the season, the queen begins laying eggs that will hatch into future queens and males. In late summer or fall, these will mate; the males will shortly die, but the fertilized females will find sheltered spots to overwinter, starting the annual cycle again in the spring.

The individual of V. vidua recently photographed was clearly feeding on pollen from the beach plum flowers, but like most other yellowjackets, this species is largely predatory. Yellowjackets are not popular insects with most humans because of their ability to sting in defense of their colonies. But away from their nests, yellowjackets are rarely aggressive, and ecologically, this is a very important group, playing roles in regulating populations of other arthropods. We were happy to be able to add another Vespula species to the Martha’s Vineyard Atlas of Life, and we invite you to contribute your wildlife sightings, too!