Human travel and commerce have completely rewritten the book on wildlife distribution. Deliberately or by accident, humans have transported many thousands of species from their native ranges to new regions or continents. Some of these species fail to get established; others settle in as unobtrusive occupants of their new home; and some, unfortunately, find nothing to constrain their numbers and do enormous ecological harm as invasive species. 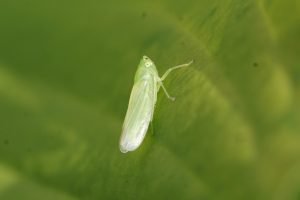 A good illustration of the human role in all this comes from a pale green, half-inch leafhopper called Pagaronia minor. According to the Bugguide information page for this species, P. minor is native to Japan and was first detected in North American in 2005, in New York. How it got there is unknown, but given the distance involved and the limited mobility of this insect, human-aided transport of some kind is a certainty.

Ordinarily, a weak-flying insect like this would also be unable to cross the water barrier that surrounds Martha’s Vineyard. But it took little more than a decade for P. minor to make it from New York to the Vineyard. The first local record we’re aware of was July 14, 2018, when iNaturalist user achang photographed the species in Edgartown, near Morning Glory Farm. (You can view the research-grade record here.) Then on May 12, 2021, I posted to iNat an immature leafhopper found in my Oak Bluffs yard. It was promptly identified by a leafhopper expert as P. minor, and since then, I’ve begun finding adults of this species, recognizable by three dark spots on the “nose,” in our yard. Perhaps not coincidentally, they seem to prefer another East Asian native, horticultural Forsythia, as a perch and perhaps as a food source.

The fact is that while several miles of ocean water give the Vineyard some protection against the arrival of nonnative species, large-scale importation of plants, soil, and other agricultural and horticultural products represents a startlingly efficient means for new species to travel to Martha’s Vineyard. The Vineyard looks isolated, but ecologically, we’re much more closely connected to the mainland than we often think. And that’s definitely a mixed blessing.

Leafhoppers both immature and adult feed on the sap of plants. Generally, leafhoppers are ecologically benign, though they sometimes grow abundant enough to damage plants, and they are capable of spreading plant diseases. So far, I have seen no evidence that Pagaronia minor is having any harmful effects on the Vineyard, or indeed anywhere in its new range in the northeastern United States. Given that it’s here and apparently established, we can only hope that it settles in as a well-behaved member of the island’s insect fauna.

BiodiversityWorks’ Martha’s Vineyard Atlas of Life project exists in part to detect and track the arrival of nonnative species like P. minor. We draw extensively on iNaturalist.org for information. You can contribute by establishing an iNaturalist account and posting your wildlife photographs there. All records from Martha’s Vineyard are automatically included in our Vineyard Atlas of Life project. 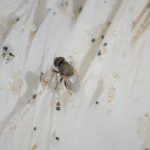 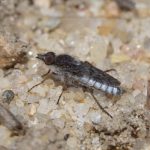