Bat Week is an annual, international celebration of the role of bats in nature. October is also a month where we see lots of bats around – but mostly the decorative kind associated with Halloween.

Why don’t we see a lot of bats flying through the sky this time of year? By the end of July, female bats have raised their young and maternity colonies have broken up. Bats spend the rest of the summer enjoying the warm nights and eating as much as they can. As fall approaches, the air gets cool and nights are longer; while we are thinking about pumpkins, sweaters, and hot apple cider, bats are thinking about swarming with other bats. And about sex!

As we are pulling on our Halloween costumes, most bats have finished mating and are either migrating south or searching for a suitable hibernation site for the winter. Many females will store sperm until the spring, but some mate during hibernation, and others might even mate in the spring. Bats still have some sex secrets we have yet to figure out!

When females emerge in the spring and begin

feeding, gestation begins. They form colonies in May, give birth, and raise their pups together through the end of July.

Several bats found in this region, the silver-haired, hoary and red bat, migrate to where it is still warm enough to roost in trees, woodpiles, or under leaf litter, and to find insects in case they need a snack. Mark Faherty snapped this picture of a silver-haired bat during migration. In contrast, our most common bat, the big brown, won’t go far, since most are year-round residents overwintering in attics.

Through our research with collaborators over the last six years, we now know that a few individuals of our rarest bat species, the Northern long-eared, hibernate in damp undergroun 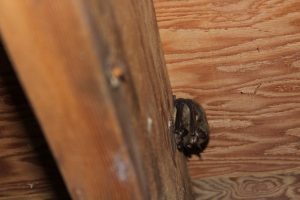 d cinder block basements or crawl spaces in coastal areas (Long Island, Martha’s Vineyard, or Nantucket) rather than flying to caves and mines inland in New England.  Those inland sites are where we thought they all hibernated, and where millions of their species have died from white-nose syndrome. In the photo to the right two Northern long-eared bats, found in December, huddle together on a wood joist in a damp basement off Lambert’s Cove Road. Our mild winters allow these coastal Northern long-eared bats to go into hibernation later and come out early, often going undetected by seasonal homeowners.  These bats stay active well into November, whereas bats in Vermont and New York are hibernating by the end of October.

Even though bat activity is winding down, you may still see a real bat flying around this Halloween. Our resident bats will be out on warm nights eating as much as they can. And if you are not lucky enough to get a glimpse of one yourself, enjoy this video shot by Larry Hepler of what are likely big brown or red bats enjoying an early fall evening.

I'm a wildlife biologist and the Asst. Director of BiodiversityWorks on the island of Martha's Vineyard, MA. I have a bachelor's degree in wildlife management from the University of New Hampshire and earned my M.S. in Conservation Biology from Antioch University New England studying the activity patterns of coastal river otters on the island using camera traps.