What is your response when you notice rodent activity on your property? Do you go set some snap traps or do you deploy bait boxes with rodenticide? It’s reasonable to want to address a rodent issue as quickly as possible before populations get out of hand. But the control method you choose may have impacts you don’t expect.  In particular, the rodenticide used in bait boxes is often the cause of unintentional risk or harm to children, pets, and wildlife.

The primary concern of bait boxes is secondary poisoning of children, pets, and wildlife. Bait is often unknowingly spread by rodents far beyond the point of infestation, increasing the chances that children will ingest it directly. The Environmental Protection Agency (EPA) conducted a four-year survey from 1999 to 2003 and found that at least 25,549 children under six had ingested rodenticide and suffered from poisoning symptoms. Additionally, the Centers for Disease Control and Prevention (CDC) receive around 15,000 calls each year from parents of children that have ingested rat poison.

Animals further up the food chain — including both pets and wildlife — are poisoned from eating rodents that have consumed bait, regardless of whether the bait was sealed in a box or out in the open. Not all of the rodents die underground, so poisoned carcasses may be scavenged. Or rodents impaired by the rodenticide may be easily captured and eaten. Predatory birds, like owls and hawks, can suffer lethal or sublethal poisoning when they prey on a poisoned rodent. Ultimately, then, rodentcide often kills the species that are our primary resources for natural pest control. Songbirds, shorebirds, waterfowl, and reptiles are all also at risk of being poisoned from directly eating bait.

One more reason to avoid using bait traps is the undue suffering caused to the rodent itself.  Many rodenticides are anti-coagulants, causing the critter to slowly bleed out over the course of several days.  There are other more humane, and effective, options to approach rodent control.

Ask any wildlife rehabilitator about glue traps, and you will get an earful of how much they dislike them.  Glue traps are popular with pest control companies due to their ease of use. But they are unpopular with wildlife rehabilitators and many veterinarians due to the non-target wild and domestic animals captured in them. The sticky traps capture small animals, which are left to die a slow death mired in the goop.  When these traps are used in barns, attics or sheds, they often capture birds, bats, and snakes, all of which are helpful species that control rodent or non-rodent pests around your yard.

Remove the extra food sources that cause rodents to visit your property in the first place.  Composting is a great way to reduce our food wastes but can be attractive to unwanted animals if you have an open compost pile. Instead, opt for a closed compost bin to retain your food scraps. Bird feeders sometimes attract more than just the birds. Remove your feeders from May through September. During this time, bird food sources are more abundant, and most birds are feeding primarily on insects. In the summer, swap the seed feeder for a hummingbird feeder and focus on providing a fresh water source for bird visitors. Be sure to change your hummingbird nectar every couple of days in warm weather to prevent spoiling and clean your bird bath regularly. If you do feed birds in winter, let the birds empty the feeder completely before you re-fill it. This will encourage them to clean up any seed on the ground. 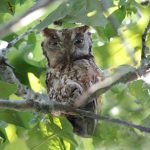 Look to nature for inspiration and mimic the surrounding natural communities.  You will notice forests and plains do not have the same issues of excessive rodent populations.  Work towards creating more habitat for wildlife to restore balance and support the natural dynamics between predators and prey.  Snakes, owls, and other predatory birds naturally feed on rodents. Create shelter and nesting sites to support these beneficial species.

While some might suggest an outdoor cat as a pest control option, this is not a method we support as cats kill indiscriminately and harm many native wildlife species. Cats can, however, be very effective at mouse control indoors.

Regular snap traps are one option for safe rodent control in your home; if you set them away from pets and children, set them carefully, and check them regularly. An easy way to keep children and pets out of snap traps set in your home is to set them under a milk crate or box with an opening that allows mice or rats to enter but nothing larger. 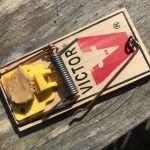 Some newer lethal trap designs provide a quick-kill and can be highly effective. One company has designed a system that is powered by CO2 and is spring-loaded to quickly euthanize the rodent. It also re-sets itself.  Even though the upfront costs are greater, the cartridges are long-lasting and there are no harmful toxins involved. They can be used indoors or outdoors. If you are interested in learning more about these traps – CLICK HERE. 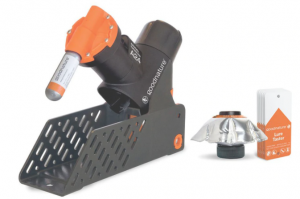 Angela was the Natural Neighbors program director from May 2021 to November 2022. She grew up on Martha’s Vineyard and lives in West Tisbury. Angela has a B.S. from UMass in Plant, Soil, and Insect Sciences and an M.S. from American Public University in Environmental Management and Policy.