Flies – the order Diptera – are an incredibly diverse group, and they’ve evolved an astonishing array of bizarre life histories. I recently encountered an example of one of the stranger things the world of Diptera has to offer: the bot fly Cephenemyia phobifer.

A smallish family with about 40 North American representatives, the bot flies (family Oestridae) all have larvae that mature as endoparasites on mammals – that is, the fly larvae matures inside a mammal’s body. The details vary from bot fly to bot fly, with different taxonomic groups of bot flies targeting different mammalian species and different parts of the body. Adult bot flies generally lack functional mouthparts and are unable to feed; because of their resulting short adult life spans and the hidden lives of their larvae, bot flies are not frequently encountered. Finding this one was certainly a first for me. The deer nose bot fly Cephenemyia phobifer, photographed in Correllus State Forest on May 22, 2022. Note the bee-like appearance and absence of any visible mouthparts.

In late May, I was looking for insects in Correllus State Forest when a good-sized fly, resembling a bumblebee, caught my eye as it flew in and perched on a stick on the ground. I managed just a couple of photos before it darted off again. I assumed it was one of the many bee-like Syrphid or hoverflies and deferred trying to ID it until I got home. Looking at the photos, I immediately noticed the absence of mouthparts, figured that meant a bot fly, and in short order was able to ID the fly as Cephenemyia phobifer – a deer nose bot fly.

The astonishing details of this fly’s life history are as follows. It is one of relatively few flies that give birth to live young instead of laying eggs (technically, eggs are produced but hatch within the adult female’s reproductive tract). When it finds a suitable host (limited to white-tailed deer for this fly species on Martha’s Vineyard), an adult female Cephenemyia expels a larva into a nostril of the deer. The larva, already mobile, makes its way into the nasal cavity or throat of the host animal, where it remains, feeding on the tissue and fluids of the host until it reaches maturity. At that point, it emerges to find a bot fly of the opposite sex, mate, and repeat the life cycle. The process does no serious, lasting harm to the deer, though it can’t be comfortable to host a bot fly larva!

I asked several hunters I know if they’ve ever observed one of these larvae, perhaps emerging from a downed deer, and only one reported having seen one. So I suspect these flies are not terribly common on the Vineyard. That’s good news for deer! But I’ll remain alert for more examples of this interesting family, such as the genus Cuterebra, with larvae that mature under the skin of rabbits and rodents. Their habits may be appalling to human sensibilities, but you have to admit that these flies amply illustrate the infinite creativity of evolution. 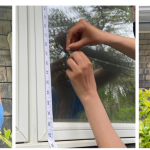 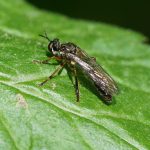 Think Like a FlyInsects, Martha's Vineyard Atlas of Life, Uncategorized