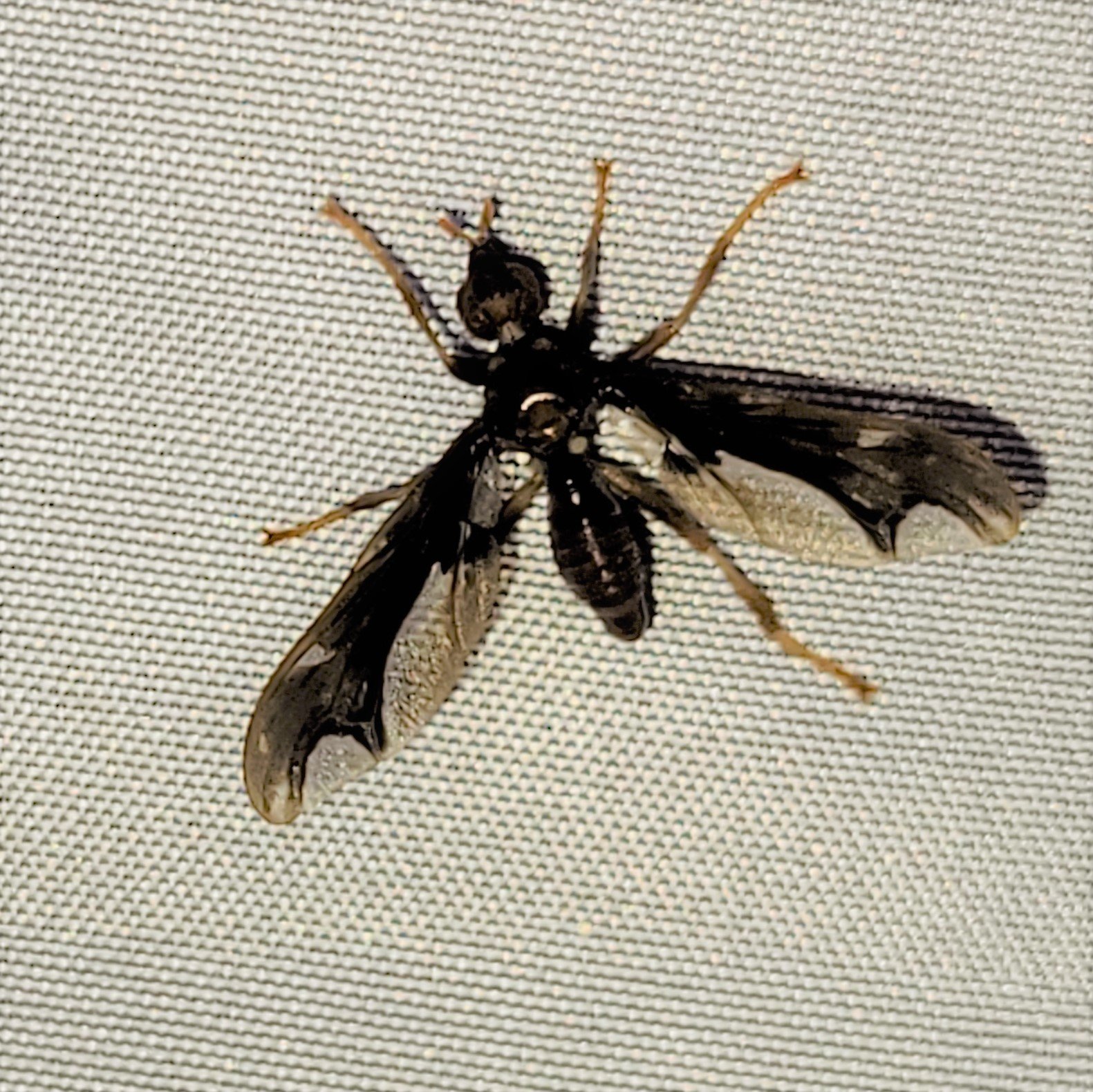 There is virtually no end to the list of strange life histories insects have evolved. I came across a good example as I tended a moth sheet (a white sheet illuminated by black-light bulbs, used to attract nocturnal insects) during our Long Point Wildlife Refuge Bioblitz on the night of June 17. A large, boldly patterned insect smacked into the sheet, dashed rapidly around the vertical cloth surface, and disappeared as fast as it had arrived. I managed only one cell phone photo of it as it scampered around the sheet.

Based on its large eyes, short antennae, and the presence of only one pair of wings, I knew I was dealing with a fly. When I uploaded my image into iNaturalist, iNat’s artificial intelligence quickly and correctly ID’d the distinctive insect as Pyrgota undata, a fly in the very small family (only nine North American species) Pyrgotidae.

A parasite on May and June beetles, Pyrgota undata graples with its host species in mid-air and lays an egg between two abdominal sections on the beetle.

On researching this species, I found that the entire family Pyrgotidae consists of internal parasites on beetles. The species account for P. undata on Bugguide explains that a female Pyrgota “lights on a feeding May beetle, causing it to take flight, then oviposits into beetle’s back while soft parts are exposed. Flies usually attack female hosts only and may pursue them under lights. Larva takes ~14 days to kill host, consumes entire interior, pupates inside host and emerges following spring.” Yikes!

The presence of Pyrgota at my moth sheet made perfect sense: one of the most common visitors to the sheet that night was a large “May beetle” species in the genus Phyllophaga – a likely candidate for a host for Pyrgota. My boldly patterned fly, that is to say, was likely shopping around for a suitable beetle to lay an egg on.

Pyrgota undata ranges across much of the eastern half of the United States, and it’s encountered pretty frequently (there are more than 650 observations of the species in iNaturalist). But the species appears rather scarce in Massachusetts, with just two previous iNat records for the state, and mine was the first individual from the Vineyard to make it into iNat. The species, though, could easily be overlooked, given its nocturnal habits.

As dramatic as the egg-laying behavior of Pyrgota is, this is by no means the only example of an insect “sky pirate.” In the large fly family Conopidae, for example, many species are said to similarly parasitize their hosts in mid-air, even having evolved can opener-like structures at the ends of their abdomens to pry their hosts’ abdominal sections apart for easy egg-laying! This strategy and behavior, that is to say, has evolved more than once among flies. It’s a reminder that evolution finds creative ways to exploit every possible opportunity.