Black skimmers began nesting in Massachusetts in 1985, but always in low numbers (fewer than seven pairs). They first nested on Martha’s Vineyard (MV) in 2010 at Norton Point beach in Edgartown; however, they failed to fledge chicks that year. When a few pairs attempted again in 2011, a hunting raptor caused mass abandonment of the tern and skimmer colony. In 2012, the skimmers returned, and four pairs fledged chicks. Since then, the MV black skimmer colony has continued to grow annually, with nesting skimmers shifting first from Norton Point barrier beach to the Cape Pogue elbow and then to the sandy spit at Little Beach (Eel Pond) in 2018. There, where the colony has continued to grow steadily, from 12 pairs in 2018 to 22 this year!

It is shaping up to be a successful nesting season for the skimmers, after devastating losses to black-crowned night heron predation in 2021, when only two chicks fledged. While common and least terns suffered significant chick losses to the night herons this year, more skimmer chicks managed to avoid the herons than last year, and we were recently able to capture and band nine of the chicks. We wait for chicks to reach about three weeks of age to make sure their legs are the right size to hold bands they will wear for many years. Early in the morning, before it gets too hot, we work as a team of 7 – 9 experienced monitors to capture all chicks of banding age. We enter the colony with a plan to ensure the safety of the skimmer chicks and that of their tern and plover neighbors. Chicks are placed in soft pillow cases and carried to the banding station, where we place them in a shaded soft holding pen before we weigh, measure, and band them. Each chick receives a pumpkin-colored leg band with a field-readable unique code and a metal Federal bird band. When we finish banding the chicks, they are returned to their parents. The fact that chicks reached banding age (about 3 weeks) is reason for hope that they will fledge in another week, as they are too large now for night herons to be interested in them as prey. 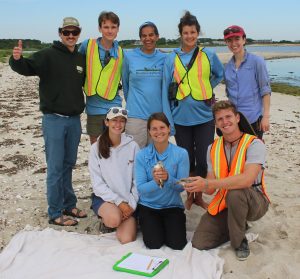 We’ve all been monitoring beach-nesting birds since the first nests were found in early April, and it is hard work with a lot of sad moments. Sometimes you monitor a piping plover pair for a month only to find their nest lost to a skunk or a crow just before hatching. Or chicks hatch and are eaten right away by a crow. We’ve also observed a lot of nest and chick losses to black crowned-night herons. So, an opportunity to spend a morning celebrating the success of these skimmers was welcome.

In 2017, BiodiversityWorks partnered with MassWildlife and The Trustees to initiate this black skimmer banding project on the island as part of an Atlantic Coast study. With the species expanding north, we can learn a lot about population dynamics, range expansion, and migration patterns by placing color bands with a unique letter and number combination on each bird. With so many biologists and birdwatchers along the coast, we receive re-sights of these color bands from areas where the skimmers stop during their migration and where they spend the winter. Black simmers from the island have been re-sighted frequently on the Atlantic coast of Florida in the winter, and a few on the Gulf side. They have even shown some site fidelity to wintering spots, such as areas North and South of Jacksonville.  Here are some re-sights of A8, first banded as a chick in 2017 and now nesting as an adult here on MV. 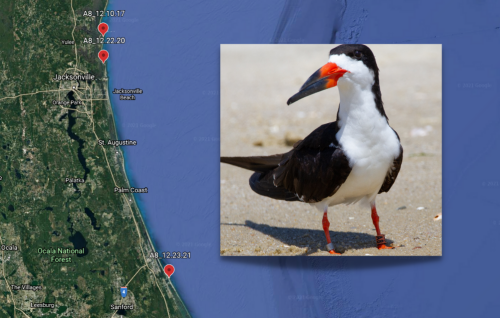 Black Skimmer A8 spends the winter near Jacksonville, FL

There are currently three confirmed skimmer nesting sites in the state this year. It is likely that more sites will host nesting colonies as the species becomes more established in Massachusetts. Many will stay in the area as late as October before flying south for the winter. Thank you to Shea Fee (The Trustees) and Noah Froh (Sheriff’s Meadow Foundation) for joining the banding team and to The Trustees and Sheriff’s Meadow Foundation for protecting nesting habitat for these and other beach-nesting species.