The willet (Tringa semipalmata) is a common and conspicuous summer visitor along the Atlantic coast and on Martha’s Vineyard, arriving in spring and returning to the same nesting locations each year.

Until recently, not much was known about willet migration. But the advent of a new technology, the geolocator, is allowing biologists to understand the comings and goings of willet. On Martha’s Vineyard, BiodiversityWorks is collaborating on a study using this technology to understand the wanderings of the island’s willet population.

In 2010, Joe Smith, an avian ecologist, began a study using geo-locators to solve the mystery of the willet’s migration in New Jersey. These small data loggers record the length of day, temperature, and whether they are wet or dry.

Biologists place geo-tags on the legs of migratory birds and then re-capture them and recover the tag when they return the following spring. Birds that exhibit strong site fidelity to nesting sites are best choices for these tags. 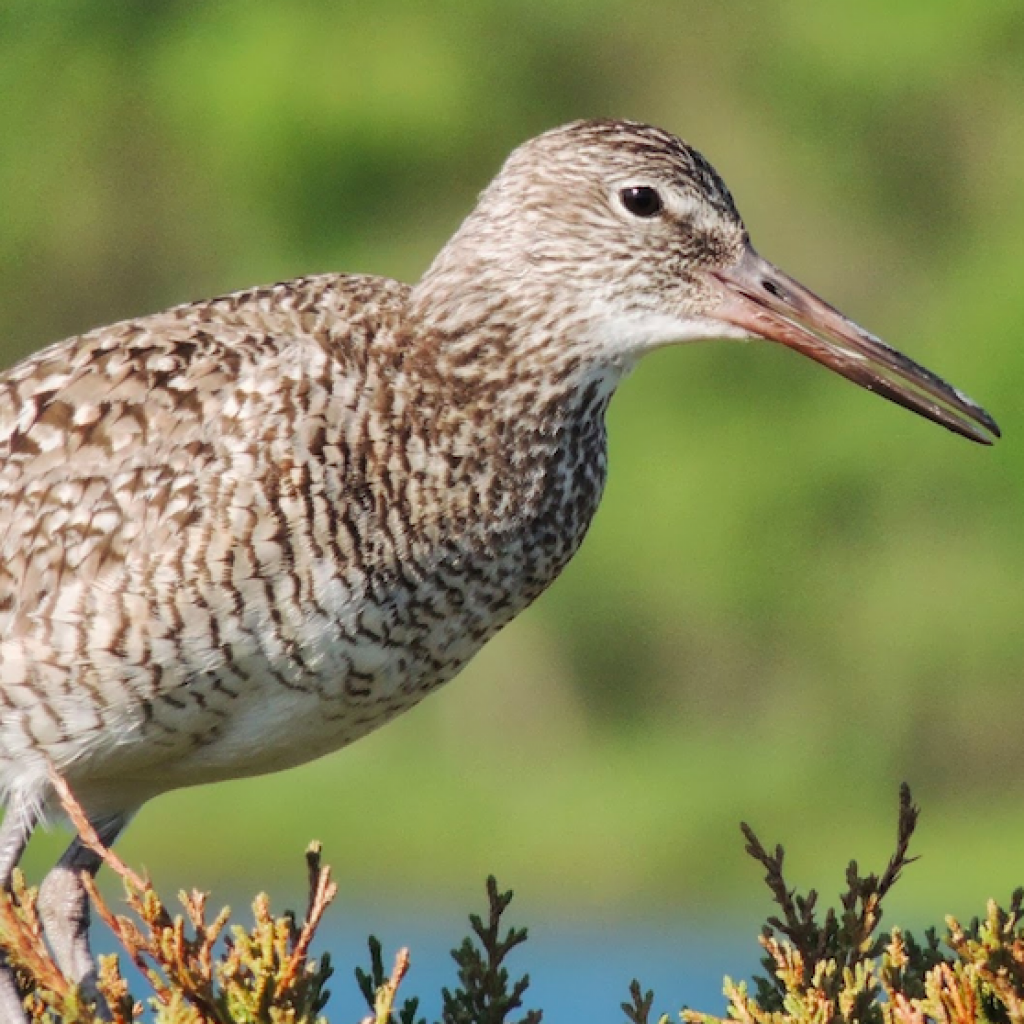 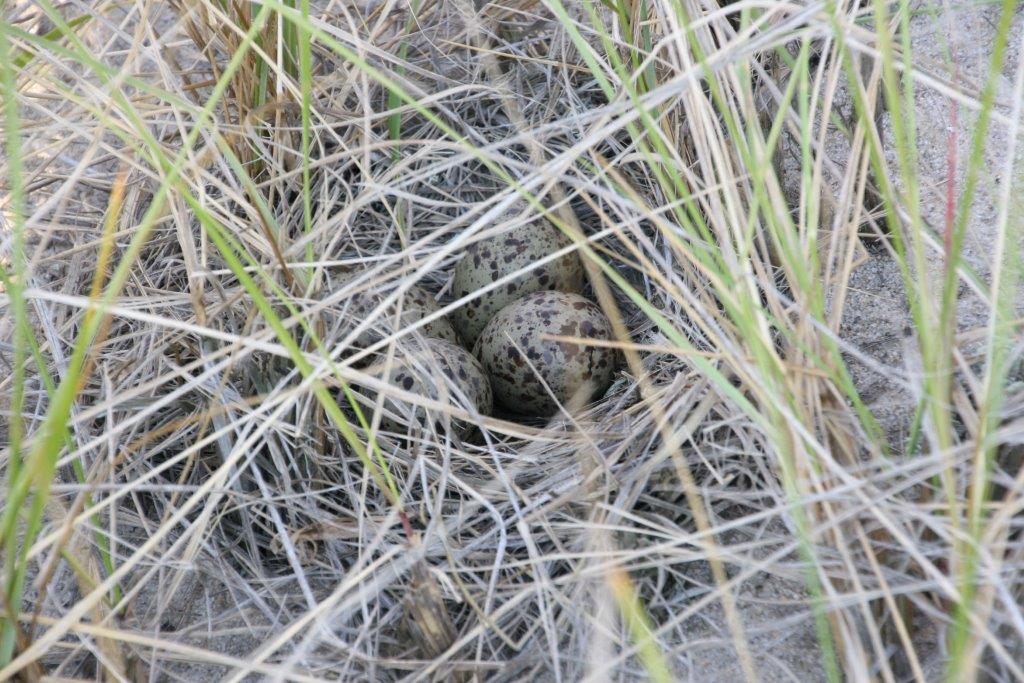 Willet are territorial, typically retaining mates between seasons, and return to their exact nesting area each spring. These characteristics make willet a good species for a geolocator study. Joe successfully tagged and re-captured 19 willet in Delaware Bay, and all of these birds traveled 3,500 miles to winter along the northeast coast of South America (Suriname to Brazil). Their travel time in a single flight: 3.5 – 4 days.

In 2013, BiodiversityWorks began collaborating with Joe Smith to determine if willet migration patterns are similar across its breeding range by adding Martha’s Vineyard as a study site. While the species is common in many Atlantic coast salt marshes, the future of salt-marsh habitat is uncertain. Coastal wetlands, by their nature, are limited in extent and although many salt marshes in the eastern U.S. have protected status, their future may be in jeopardy as sea levels rise due to climate change. The same is true for the habitats willet use in northeastern South America as shrimp farming, mining along the Amazon river, and changing land use patterns threaten coastal habitats in that region.

In collaboration with the Commonwealth of Massachusetts, Sheriff’s Meadow Foundation, and The Trustees of Reservations, we captured four nesting willet in June 2013 (2 F, 2 M), attached a geo-locator and unique color bands, and released them at the capture site. We also took blood and feather samples for sex determination, isotope analysis, and contaminant testing. In the summer of 2014, we captured and tagged four more willet in the same areas. 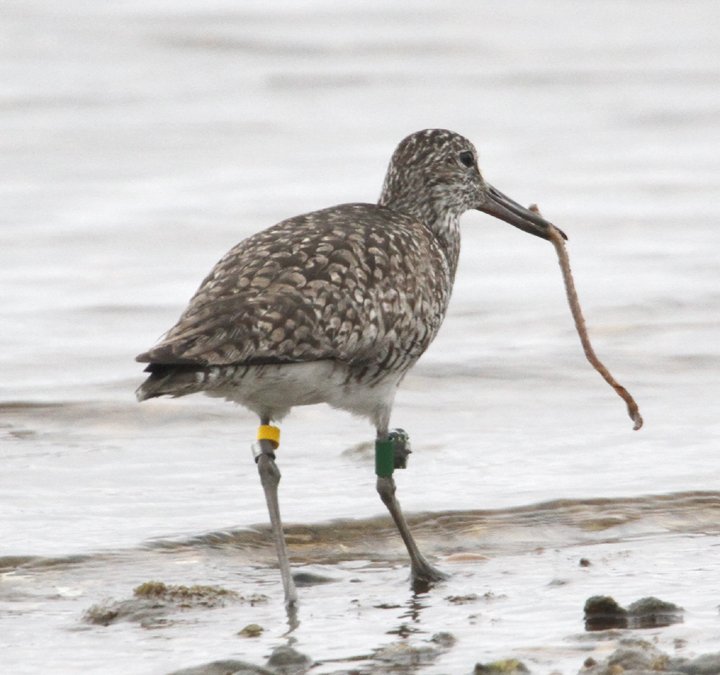 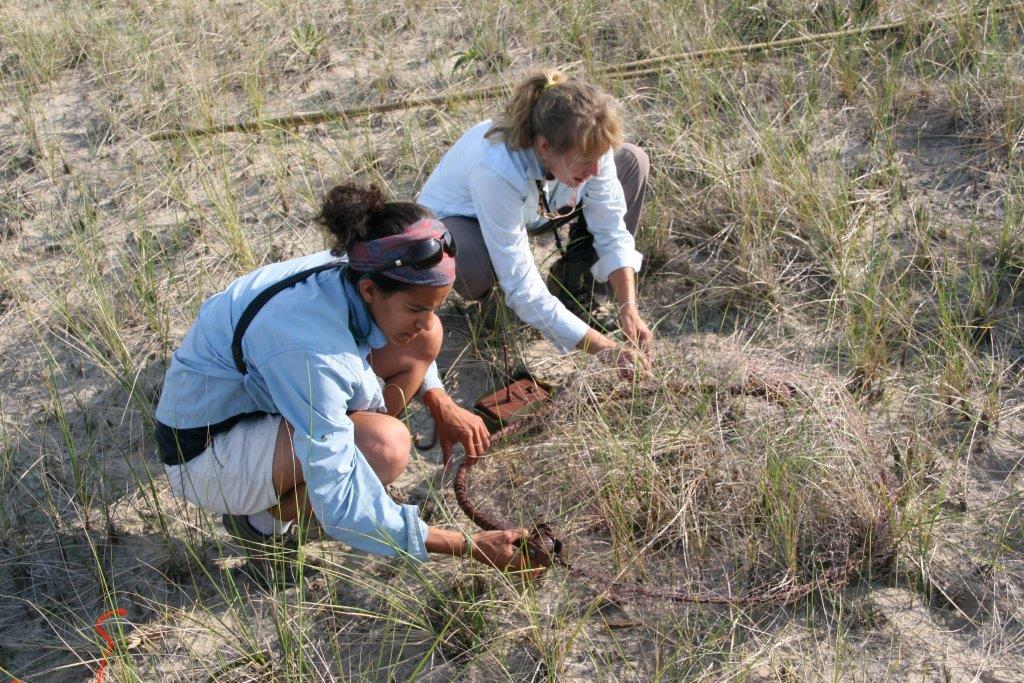 How Willet Are Captured

We captured willet using one of five methods: (1) a mist net covering a bird on the nest, (2) a decoy to attract the territorial willet to a whoosh net, (3) a remote triggered bow net placed over the nest and triggered when the adult returns, (4) a large hand held landing net quickly placed over the bird on the nest (willet do not flush from their nest until you are very close to them), or (5) placing a carpet of tiny nooses on a favored perch and waiting for the willet to land and have the nooses slip over its toes to hold it there long enough for us to capture it.

In summer 2014, 3 of our 4 tagged willet had returned to their nesting areas. We spent over 100 hours attempting to capture these willet using our full arsenal of capture gear, with the exception of a noose carpet. Alas, we were bested by these wiley birds and plagued by a few gear malfunctions! We did, however, successfully tag 4 new willet (one, a mate of a 2013 tagged willet). Most of these willet returned in 2015, and one of the 2013 tagged willet, who we didn’t see in 2014, was seen in 2015. Here are photos of returning willet around Eel Pond in Edgartown (light blue bands) and Poucha Pond – red bands. Thanks to Jeff Bernier for his photos of the Eel pond willet. 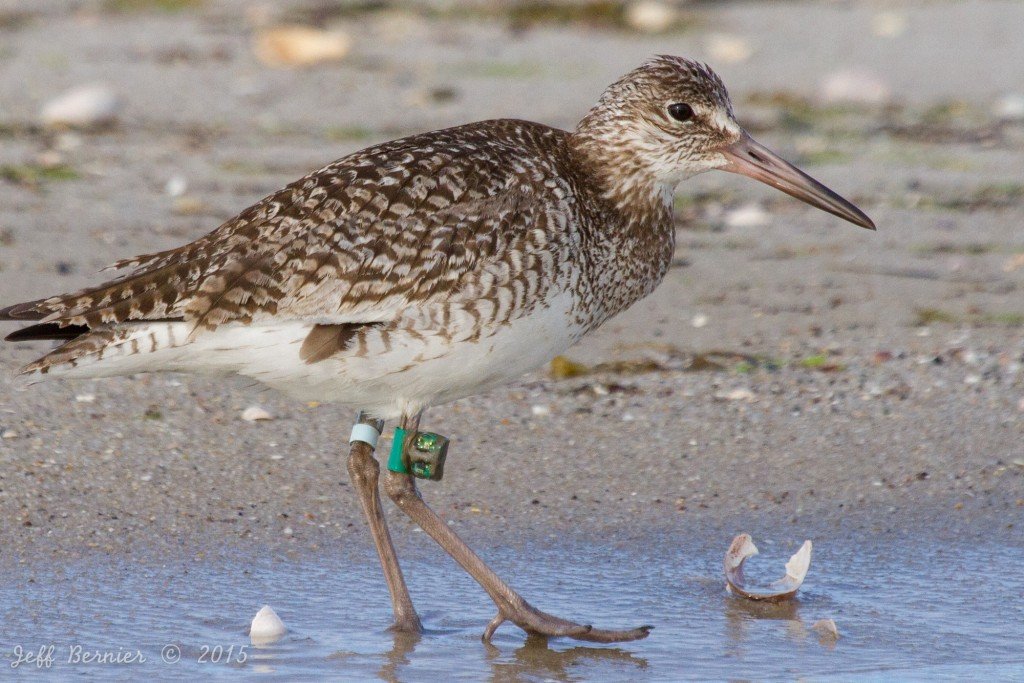 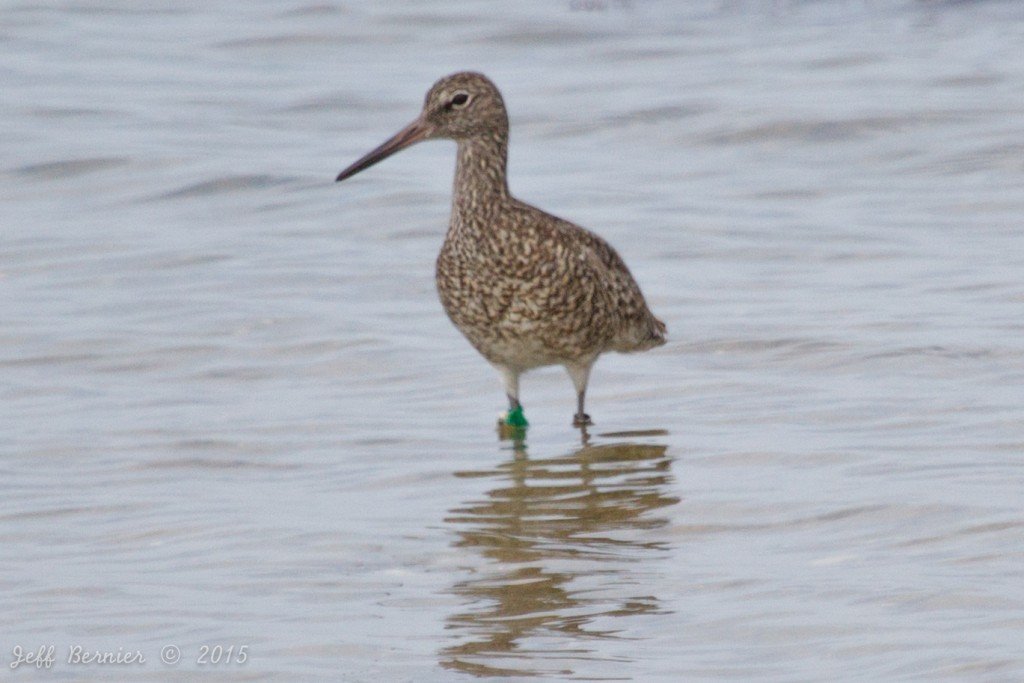 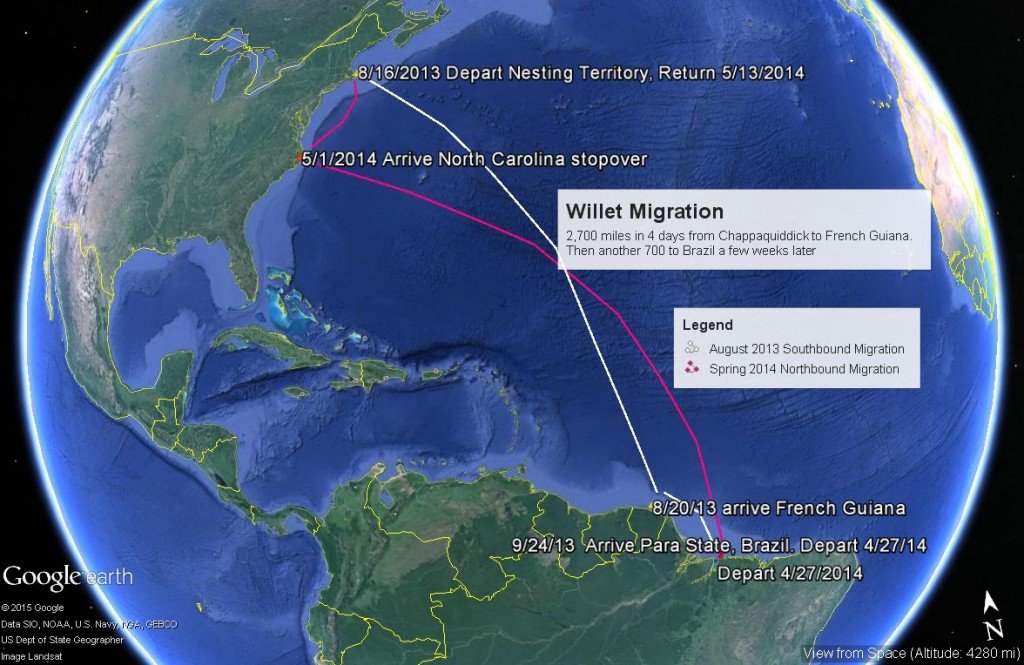 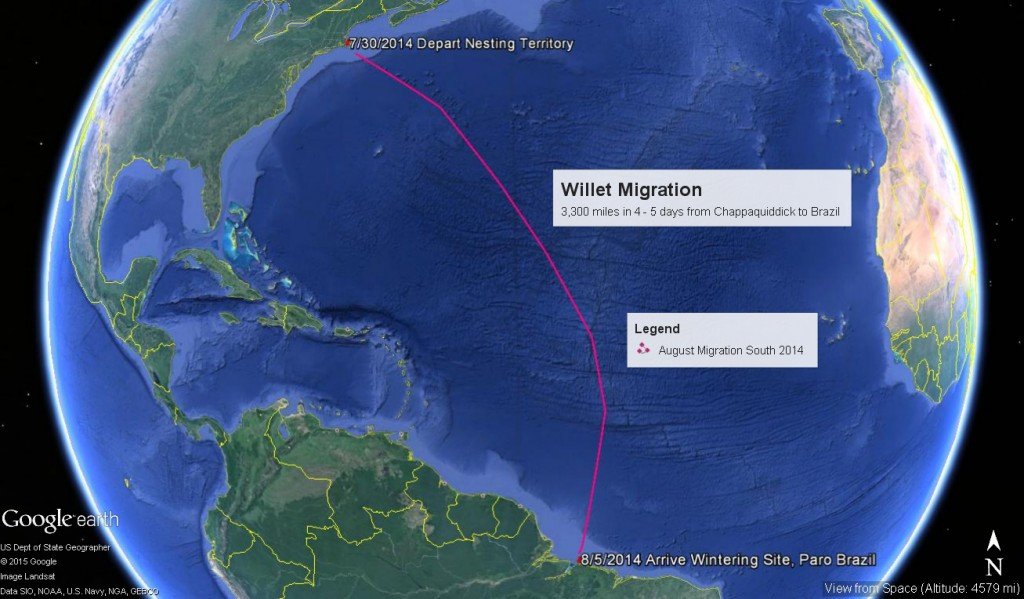 The geolocator tag we attached in 2013 had a dead battery, so we shipped it to Migration Technologies in England (the manufacturer) in order to retrieve the data. The data from the tag covered Aug 2013 through March 2014 and showed that at our Chappaquiddick willet migrated to the same region as other willet from the Northeast, except that he initially landed in French Guiana before moving to the Para region of Brazil. April 27, 2014, he left Brazil and landed in North Carolina on May 1st. May 13th, he arrived back on Chappaquiddick at his salt marsh nesting territory. MigrationMap1 On July 3oth, 2014, he left Chappaquiddick and arrived in his wintering location in Brazil on August 5th. The battery in the data logger died in March before he flew North in the spring of 2015, but we observed him at his nesting territory in mid May.

The willet nesting at Eel pond in Edgartown and along Poucha pond on Chappaquiddick had a banner nesting year! Their first nest attempts hatched, and they were guarding chicks much earlier than we expected, which made it very difficult for us to recapture our tagged birds. Willet are much more defensive of their nests and territories when they are incubating than when they have chicks. There is more drama and shrieking when we approach pairs with chicks and less interest in our willet decoys who might be invading their territory. After spending quite a bit of time scouting their territories and trying to fake invasions of single or paired willet decoys, we realized that they were most defensive against us and were regularly perching on trees and posts to voice their objections at our presence. We used this to our advantage and were able to capture the red banded willet above at the end of July using a carpet of small nooses that caught his feet on his favorite perch. 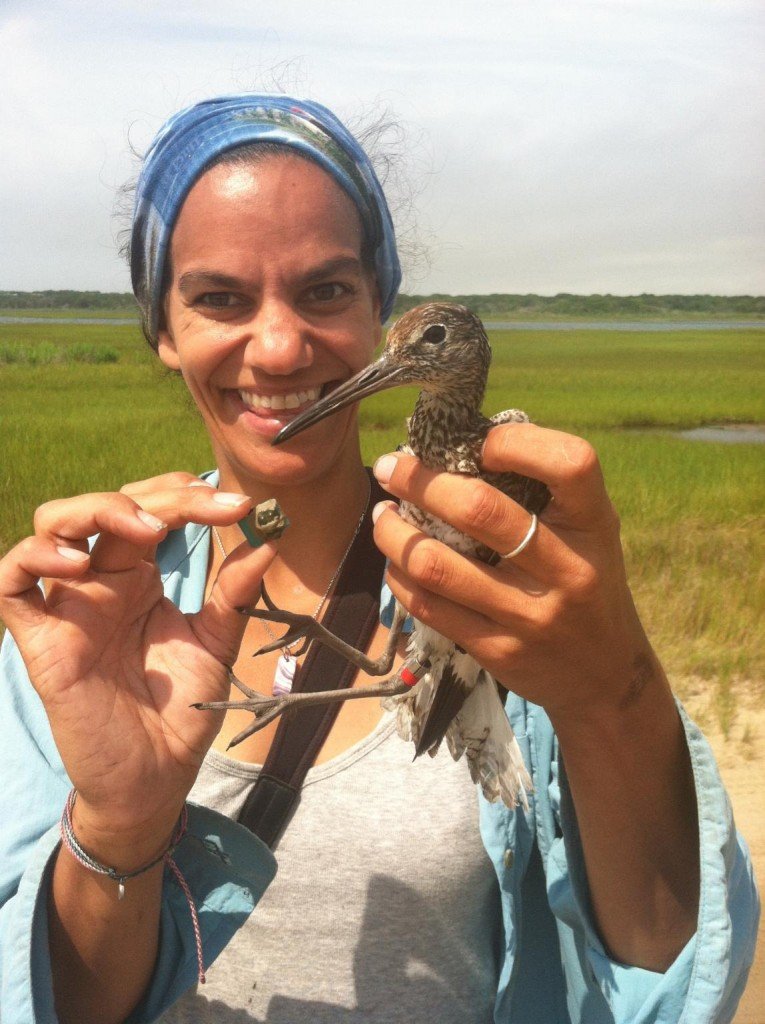